What is Traction Alopecia? 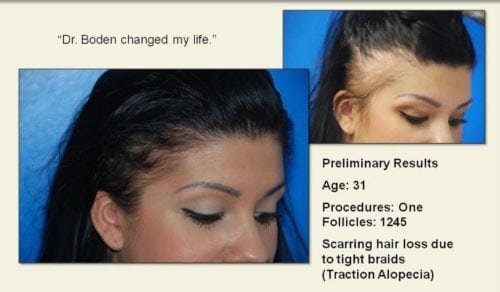 Traction alopecia is a form of hair loss, caused primarily by the pulling force being applied to the hair. This commonly results from the sufferer frequently wearing their hair in a particularly tight ponytail, pigtails, or braids.

Over long periods of time under these circumstances, Traction Alopecia will cause the production of hair to slow down and finally cease, resulting in permanent hair loss along the edges of the hairline.

Hairstyles that place the roots of the hair under constant pressure are the main cause of Traction Alopecia. These include tightly-fitting hair extensions, weaves, hairpieces and tautly woven styles like braids and cornrows.

What are the signs of Traction Alopecia and who does it affect?

However, men who wear their hair in tight braids, dreadlocks or sport hair extensions are also susceptible to Traction Alopecia.

How is Traction Alopecia treated?

The main treatment for traction alopecia is to change your hairstyle. Avoid wearing your hair in a tight style, especially overnight. You’ll know it’s too tight if it hurts. Remove braids, cornrows, or dreadlocks. Avoid pulling your hair up into a ponytail or bun, or loosen the style.

If your hair is very long, cut it. Minimize the use of chemicals and heat, which can damage your hair.

Dr. Boden may prescribe one of these treatments for traction alopecia:

If you’ve lost a lot of hair and it’s not growing back, hair transplant surgery may be your best option.

Once the follicles affected by Traction Alopecia have ceased to produce hair, treatment will not be effective. This will be the case if the hair has been under large amounts of strain for many years and the areas of traction alopecia hair loss are completely bald (these areas will appear shiny).